A Pint-Sized Bit of Rhythm

Good things often come in small packages. That was definitely true of Ruby Austin. Born on January 23, 2018 weighing just 5 pounds 6 ounces, she was a happy baby, loving life and enjoying the world around her. Ruby formed an instant attraction to music, but this is no surprise as Mom and Dad are musicians and singers. As soon as she could hold a musical toy Ruby joined in with the rhythm.

Ruby’s development in personality and pep were humming along; however, her muscle tone, vision and focus had some catching up to do. At four months of age, Ruby was first diagnosed her as hypotonic (excess muscle tone), and testing showed both microcephaly (abnormally small head) and Leukoencephalopathy (decreased white brain matter). While they have yet to receive a definitive cause for Ruby’s delays and impairments, she recently received a diagnosis of hypotonic cerebral palsy.

To help Ruby advance and build up her strength, the Austins brought her to see Rene’ Manker at Senses in Motion. Here she received a form of therapy called Anat Baniel Method (ABM). This therapy treats Ruby’s whole body as an interconnected system and incorporates the brain to stimulate new learning. While very effective, ABM is not covered by insurance. Rene’ introduced the Austins to Family Hope Foundation where they received a scholarship. This support allowed Ruby to continue with therapy and lifted some of financial burden.

ABM Therapy is opening new doors for Ruby. She is able to play and reach from a seated position while supported, roll to her side and put weight on her legs while assisted, chew and drink, have more control over her vision and focus, and experiment with motion in her hands, arms and legs. Ruby has grown much more adept at engaging with the world around her and more purposeful in her exploration of it. These movements are now part of her everyday routine, and her skill in them has grown along with her comfort.

With the help of ABM, Ruby can get back to doing what she loves to do…interacting with family and friends up close and personal, playing with toys, and of course, making music!

Ruby is not afraid of new things and seldom gets frustrated by limitations. She has a zest for life, laughter, and silliness. Even though Ruby is nonverbal, you can bet she knows how to express herself, from hums and excited hand waves to shrieks and squeals. Anyone with an ear for harmony knows that Ruby is making song. It just goes to show…you do not have to be big to make a mighty melody. 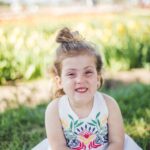 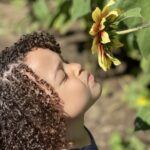